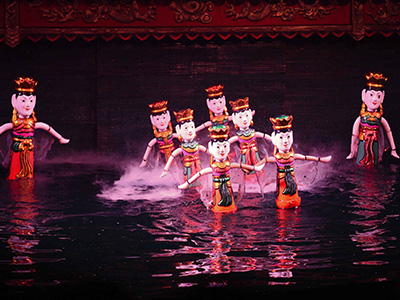 Traditional Vietnamese Water Puppet
Legend has it that, from about 1000 years ago this performance was inspired by the common life of peasants in Northern Vietnam. The stage has a frugal appearance in the middle of a shallow pond formed from the waist-deep water level of cultivated paddies. The concept is based on the heart of rural Vietnamese activities such as fishing, agriculture, and traditional tales and stories.

When viewing one of these plays, you will not only be able to witness people's lives but also appreciate the creative side of these farmers – puppeteers. Flawlessly moving, master-controlled puppets hiding behind the curtains, arrangement of classical musical instruments, and incredible vocalists create what people call the classic Vietnam "symphony." There are lots of water puppet theaters across Vietnam, but the most popular theaters are Thang Long theater in Hanoi and Golden Dragon theater in Ho Chi Minh City. 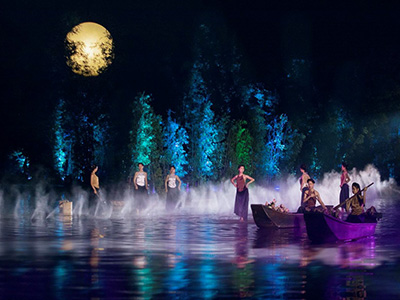 Quintessence Tonkin
Defined by a stunning water stage, 3D visual effects, authentic costumes, live music, and coordinated choreography, this show has been able to reconstruct and recapture the most compelling elements of Vietnamese village life, from folklore, music, and poetry to water puppetry, Buddhism.

Among more than 200 artists, of which more than half are local village residents. They have been undergoing instruction for over 2 years, now taking their spirit to the show stage from their own conventional entertainment. Who else can tell Tonkin's story better than the villagers themselves? It is really a performance that you should not miss when traveling on your best tour to Vietnam. 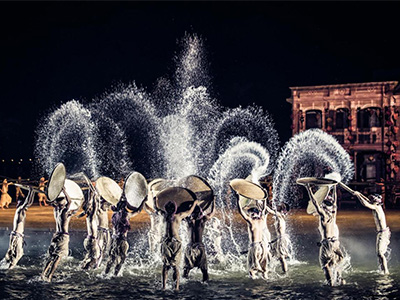 Hoi An Memories
Hoi An Memories is a large-scale outdoor show at Hoi An Impression Theme Park, a popular theme park nearby of Hoi An Town. The stage features both watery and rocky landscapes extending over one kilometer and featuring 500 actors & artists. State-of-the-art audio and lighting technologies are used to produce a creative and entertaining display.

This show has recently set two new records in Vietnam: Vietnam's largest outdoor venue, and the largest number of performers in Vietnam. The infamous Reuter also praised that the show is a global phenomenon to the futuristic tourism industry and is a performance not to miss in your Vietnam Holiday Package 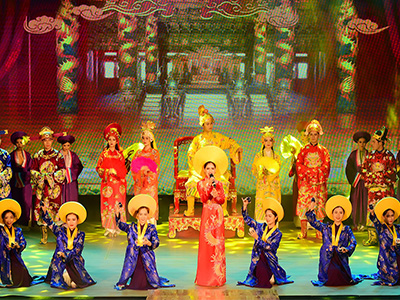 Ao Dai Show
If you are staying in Hue and Da Nang, you should not miss this Vietnamese culture show. To start discovering Vietnamese culture, there’s no better place to start than at Hue Ancient Capital. Participating in the Ao Dai Show here,  you will be immersed in the world of ao dai, which is known as the national costume in Vietnam. You will be able to “see” the glorious past of the Hue court under the Nguyen Dynasty, which is sharply recreated through art materials.

Choosing “ao dai” as the main inspiration, throughout the program are performances of royal fan dance, lotus dance, cup dance, traditional martial arts, and more. In particular, the program also has exchanges, interactions, and cultural sharing between visitors and performing artists. Besides, you can also wear King, Queen, Princess, Prince, Quan Chua, and Ao Dai clothes, you will experience the royal culture of the past and present. 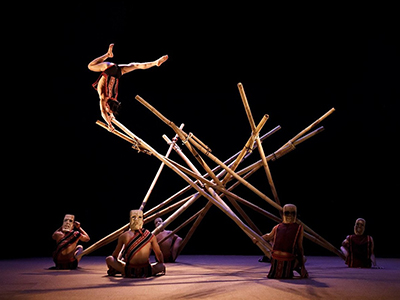 A O Show by Lune Production
Being held at the iconic Saigon Opera House, A O Show by Lune Production features visual illusions and amazing performers, combined with contemporary music by a group of talented in-house artists. Missing only the colorful outfits, the crew is often regarded as the infamous Cirque du Soleil, who balances giant bamboo props. Not only that they will execute gravity-defying stunts, but they also make your heart sync with the tempo of the show. Afterward, local dancers and musicians are very friendly to meet and greet their guests. 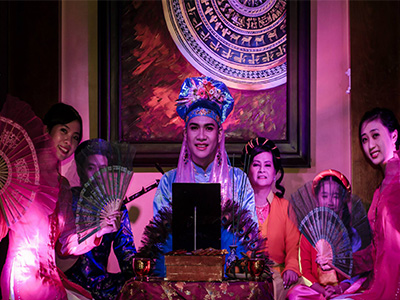 The Touch Of Masters' Hands
The Touch of Masters' Hands: Vietnamese Authentic Cultural Show provides the opportunity for travelers to learn about the many regions of Vietnam such as history, music genres, and instruments. The show stands out from most of Ho Chi Minh City's cultural shows because it uses no sort of sound amplifiers, providing a completely authentic musical experience.

An experienced host gives detailed descriptions to an international audience during the broadcast, in English, French, Japanese, and Vietnamese. Best of all, you will also be served three kinds of luxury tea, and various varieties of Vietnamese cookies and candy, and enjoy the ability to learn how to play instruments during the show.

Travel
PREVIOUS
The Remarkable Local Festivals Of Thailand (2022 - 2023)
NEXT
20 Million Tourists Are Expected To Visit Thailand In 2023, Bringing In 285 Billion In Revenue

20 Million Tourists Are Expected To Visit Thailand In 2023, Bringing In 285 Billion In Revenue

Cambodia - The Best of Local Festivals

Your request is being processed

Please fill in the form below and we will get back to as soon as possible to discuss your enquiry in more details.